The BBC began their weather broadcasts in association with the Met Office in 1922, starting with radio before moving in to television broadcasts after the end of the second world war. Over the years, technologies have moved on in particular with the introduction of computers for both data collection and graphical representation. Throughout all that time, the BBC's relationship with the Met Office remained in place, although this is due to end in early 2018 with a change of the contract to MeteoGroup for weather provision. 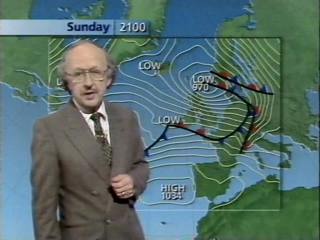 Michael Fish presents a BBC National Weather Bulletin in 1988, using the graphics set that had been introduced earlier that same year. 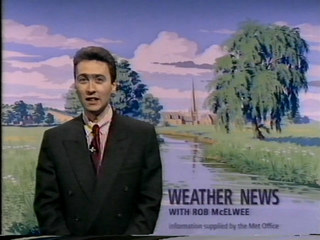 This graphical style was introduced to the weather in 1990, with occasional updates following over the years to the start board in line in the BBC's corporate identity. Rob McElwee hosts a bulletin here in 1991 and although the full BBC rebrand of earlier in 1991 was well established by now, the corporate branding hasn't yet made it down to the weather. 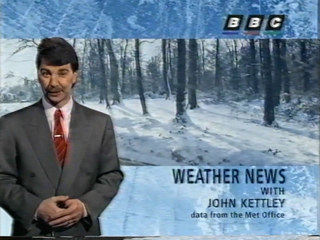 John Kettley provides the forecast covering Christmas Day 1993... and the big question as ever is will it be a white one? 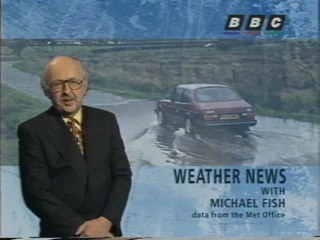 A few years later, and the start board now sees the addition of the BBC logo to the starting board which would last through until the set was replaced in. Michael Fish presents the bulletin here in 1994, warning of a lot of rain to come. 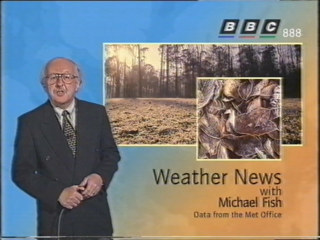 The venerable Michael Fish presents the weather from 1996. This graphics set was originally introduced in 1996 and lasted through until 2000. 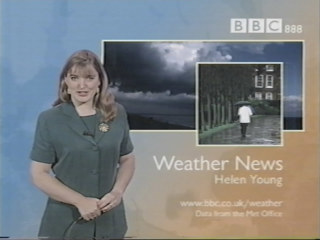 Helen Young presents the weather from 1999. With the only minor changes to the graphics having been made since 1996 being a change to reflect the BBC rebrand as well as add in their web address. 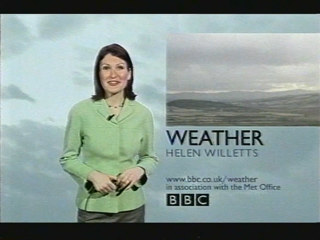 2000 saw another refreshed look to the BBC weather, and what would be the last to use the famous weather symbols on air. Featuring additional detail, as well as fully supporting widescreen broadcasting, this graphic set would last through until 2005. Helen Willetts presents a bulletin from 2004 here. 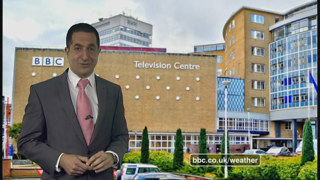 In 2005, the traditional weather symbols were dropped from the BBC in favour of more realistic maps designed to show weather more accurately. The newly introduced graphics remained in use with small tweaks for the next decade, right through until 2013 where this clip dates from. Shown shortly before 1pm on 18/3/2013, Stav Danaos presents the last weather bulletin broadcast on the news channel to come from Television Centre before their move to New Broadcasting House alongside the main news team. 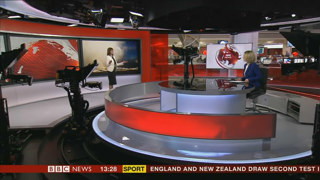 From half an hour later, the first weather bulletin to come from New Broadcasting House. Louise Lear presents from in front of a plasma screen in the news studio as part of the News at 1, simulcast between BBC One and the BBC News Channel. The graphics were largely the same as they had been from TVC, although wording on straps had been subtly updated with the changeover. 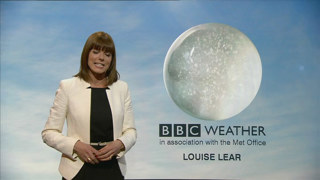 From shortly before 2 on 18/3/2013, Louise Lear has moved up from the news studio to present from the regular weather centre balcony for the first regular BBC News Channel forecast to come from New Broadcasting House. With a somewhat extended camera pan on the opening shot, just to emphasise the new location. 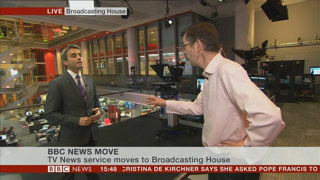 Nick Higham drops in on the Weather Centre, meeting up with John Hammond to discuss how things are changing with the move to New Broadcasting House from a weather presentation point of view. Although you can change the technology and the studios all you like, but you cannot change the British weather itself. 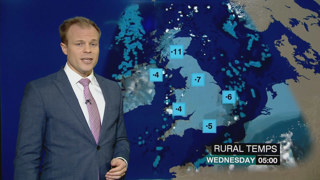 On February 6th 2018, the much delayed move for the BBC from the Met Office to Metogroup for their weather provision finally came. From just before the switchover, Simon King presents the last of the 'old look' forecasts from just before 1pm. Presumably coming from Salford, given he was seen presenting the local North West weather not long after the change. 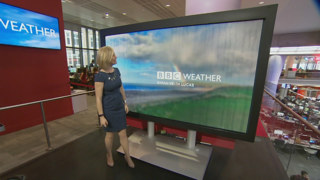 From the 1pm national news on 6/2/2018, a report taking a look at the new weather service starting that day. 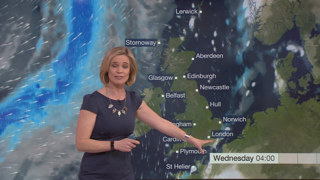 The first full new look forecast with new graphics and data supplied by Meteogroup (or the first to the UK - BBC World saw them a few minutes earlier). Which went to air on 6/2/2018 marking an end to a long era from the Met Office for the BBC. Sarah Keith-Lucas has the presenting honour.