E4 is Channel 4's spinoff entertainment channel, targetting a younger 20-30 demographic with a mix of both homegrown and US imported comedies, drama and reality shows. E4 initially launched as a pay TV channel in 2001, before moving to Freeview in 2005. This particular E4 look was introduced to the channel in late 2007, and lasted through until 2013. Idents include a series of surreal scenes, all with a teddy bear popping up. 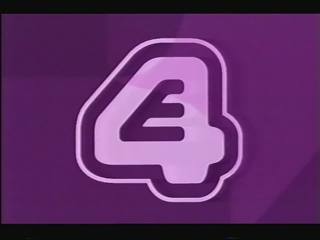 At launch, E4 was a subscription channel airing during evenings only, so in order to gain traction major comedies (such as Friends) were shifted to air new episodes there first before their Channel 4 showing. A trailer here from 2001, only four months into the life of the new channel promoting shows to be seen. 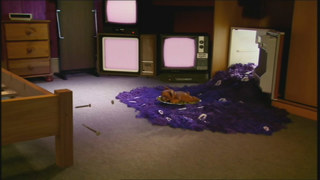 This surreal ident package was first introduced in 2007, lasting through until 2013. In most cases, a recurring teddy pig style character meets the blunt end of various objects and scenarios. In this sequence, a bedroom is taken over by purple tentacles and overflowing slime. I have to pay good money for those sorts of images online you know! 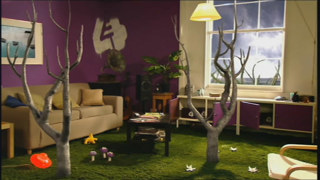 In the living room of the house now, and a quick lesson in how most digital design agencies try and look hipster, before the chair disappears into the floor. 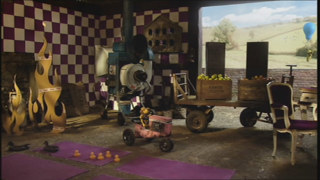 Moving to the barn on a farm for this third ident from E4. But still continuing with the surrealism, and the almost deranged attempts to kill off that little character. A cheerful reminder of those famous days of yore on E4 where every other announcement would be an introduction to an episode of Friends too. 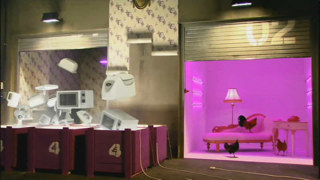 For those times we all go through when you think 'I wish I had a huge collection of kettles and microwaves, rather than just having one like a fool'. 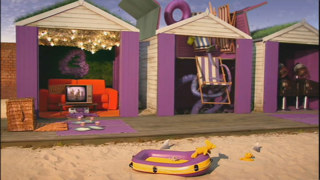 A nice day out at the beach... but beware those sand sharks. And the reappearance of those purple tentacles, just when we thought we'd seen the last of them. 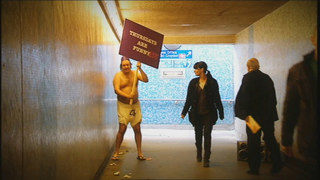 A special ident put together alongside various trailers as part of a shortlived 'Thursdays are Funnyest' programme strand. A little less surreal than the regular idents, a man stands around holding a sign whilst wearing nothing but a pair of E4 underwear. 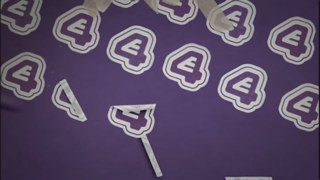 Very similar in style to that of their bigger sister Channel 4, E4 had it's own version of the rundown menu used to list all the programmes coming up on a particular day. Different variants existed each with varying opening opening graphics - In this one it's the purple wallpaper version. 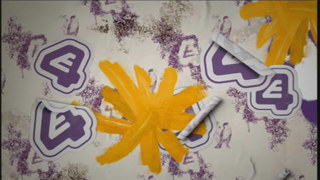 An alternative background to start off another rundown menu, this time with a white base and a lot more paint in use. 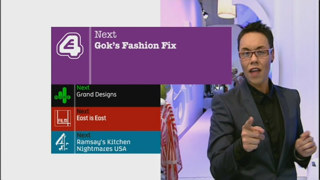 Made in the same style as the single channel rundown menu is this cross channel menu. Each of the Channel 4's family of channels is featured one at a time, just to let you know what's on next on all of them. 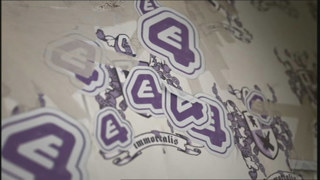 One of several short generic E4 animated holding sequences played out whilst the announcer lets us know what's coming next. 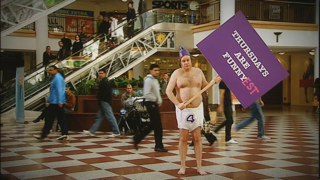 A trailer from E4 advertising a raft of new shows to the channel. All airing on Thursday, they'd branded the strand 'Thursdays are Funnyest', and filmed a man with a sign in several different locations. Voiceovers on E4 trailers at this point were still provided by the well-known Peter Dickson. A veteran of the voiceover industry, he provided the voiceovers (and even appeared occasionally invision) for nearly every E4 trailer from 2006, before eventually being quietly phased out around 2010. After many years off, he started voicing some new trailers for the station in late 2016. 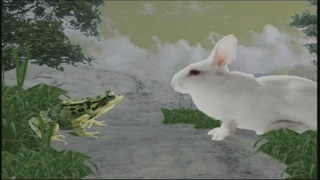 The main idents for E4 don't change much over the years. So as an ingenious way to keep the whole package fresh, every year Channel 4 run a competition for 'e-stings'. A series of break bumpers which are put together by members of the public which convey the E4 brand in wacky and creative ways, with a new competition generally held every 2 years to keep the set refreshed. In this one from 2009, a paper cutout rabbit and frog feature. 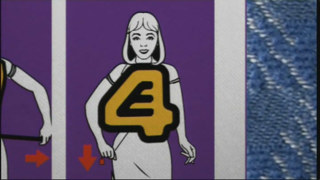 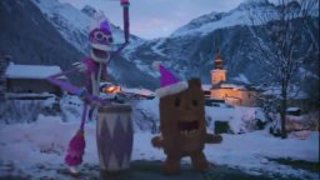 Inkeeping with their stance for the past 4 years, 2009 saw no christmas presentation for Channel 4. Rather more quietly though, their sister channel E4 saw their usual user submitted E-Stings replaced by a series of festive stings with 2 characters... though don't ask me what they are! In this version, a snowy scene and a set of drums feature. This whole set of stings was to reappear years later for Christmas 2016. 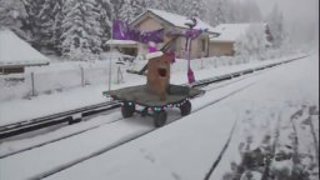 A second version, on the railway, in the snow... 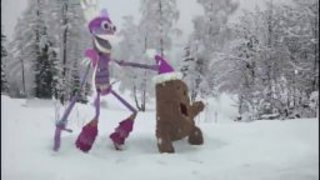 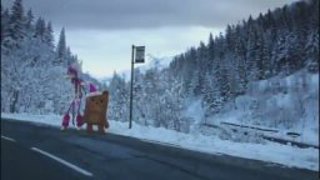 And finally, a bus stop, an E4 umbrella, and some snow... with... predictable results... 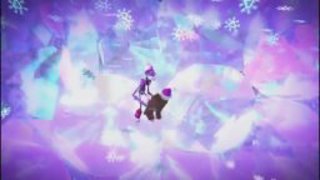 A completely different style to this one, set against a sparkly and shiny purple background, the two characters dance festively.