A selection of text services from other channels, outside of the main terrestrials. 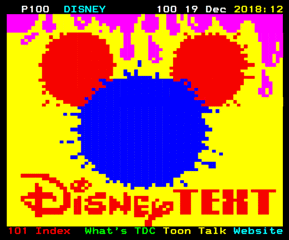 Despite being a more niche channel, and only having launched in 1995, The Disney Channel UK of the late 90s had a surprisingly large text service available. With some excellent graphic work pushing the boundaries of what was possible with the technology - just wait until you see the artwork from The Lion King or Mighty Ducks. This particular service dates from late December 1997, so includes listings for Christmas Day of that year on the channel. 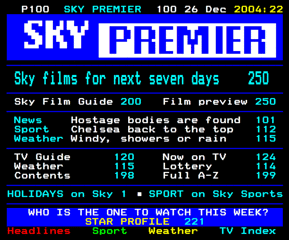 Teletext from another of the Sky channels, this time it's the Sky Premier movie channel. The text service contains a lot of pages such as news and tv listings shared across the whole of the Sky Text service, alongside some specific pages just for those movie channels. Including some reviews from the late Barry Norman, who had recently moved from the BBC to Sky. 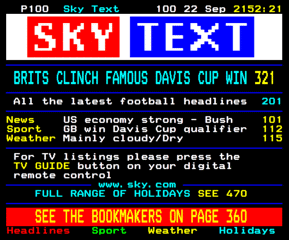 Sky Text from only 11 days after the 9/11 attacks, so unsurprisingly large chunks of the news section is taken over around the aftermath of that. With a telethon for the emergency workers taking place that day, and talk of the effects the attack has had on other industries such as finance and the games industry. Despite dating from the digital days for Sky, a very large text service is still in place from the broadcaster at this point, although it wouldn't continue for much longer. Indeed TV listings have already been culled in favour of directing people to the EPG.