Coronation Street has been ITV's flagship soap for over 50 years, throughout which one actor (Bill Roach) has remained. Made by Granada on a purpose built set at Quay Street and later MediaCityUK. First airing in 1960, the soap started off centred around a fictional street known as Coronation Street in a small working-class part of Manchester, expanding to some immediately surrounding areas as set expansion allowed. This opening sequence dates from the late 80's, featuring the same signature notes which have served the programme since its inception. 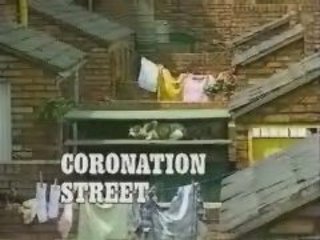 These opening credits from around 1997, had been introduced in the early 90's. This is similar to the one used throughout the 80s in that it uses the same font, and doesnt display the credits over the top. 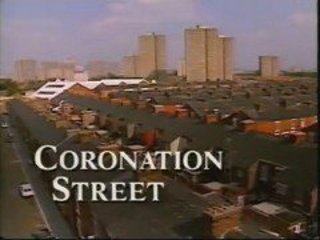 From 2001, this sequence is the same as above, except now the title appears at the beginning of the sequence (in a new font too!), whilst programme credits appear over the following scenes. 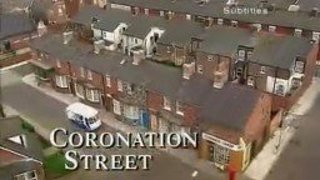 A brand new title sequence was introduced to Coronation Street near the start of 2002, in order to coincide with the move of the programme to Widescreen. Real video of the street was mixed with surrounding area edited by computer to convincingly replace what would have just shown areas of the then Granada offices in Manchester with other streets. 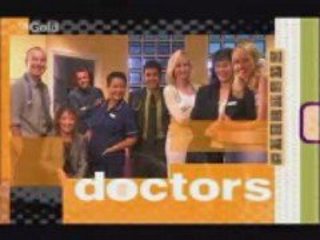 Doctors is the BBC's homegrown daytime soap. It was launched in 2000, in a lunchtime slot, and originally only ran in blocks. Because of declining popularity, the BBC were initially considering axing it at the end of 2001 when the tragic events of September 11th struck. The lunchtime slot was required for extended news bulletins, so Doctors was moved to a late afternoon slot instead. Against expectations, viewing figures in the new slot increased significantly, so much so the BBC abandoned the plans to drop it, and promoted it to a full year-round soap which has run ever since! These titles date from 2001. 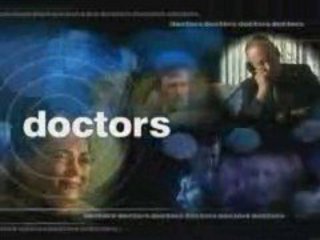 The 2002 sequence for Doctors. 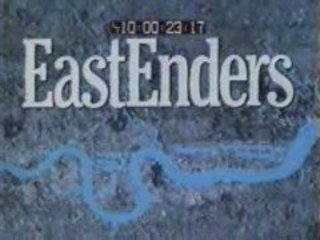 Eastenders is BBC1's flagship primetime soap, and was started by the BBC in 1985. It is based in the East End Of London, in a place called Albert Square, and of course comes complete with its own soap pub - The Queen Vic. Until the arrival of Doctors, Eastenders was the only major soap to air on the BBC for several years, contrasting heavily with ITV. This may have been due to fear as a result of their infamous flop 'Eldorado' in 1992. The opening to Eastenders from 1985 feature here. The actual titles were black and white aerial shots of East London shot onto a piece of blue card with a camera above doing the actions. This set remained in use, until 1990. 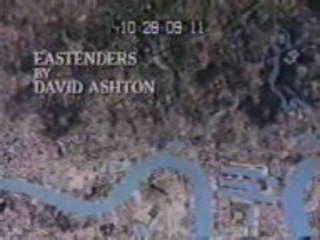 And the closing sequence from the same era. This is the big long version of the credits, which is very rarely seen, even on repeats. Thanks to James again! 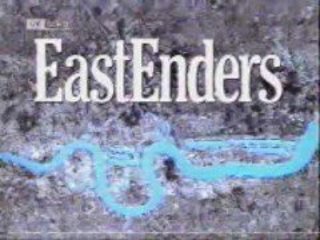 This set of titles was in the same style as the ones below, only for the first time in 1990 they were produced on Video Tape rather than traditional film. This results in more visible map, slightly different text, and no picture wobbling. 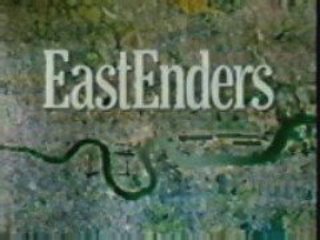 A break away from the traditional musical theme was introduced in 1993, with this 'jazzy' version. It wasn't popular with viewers, only lasting less than a year in total from 11th May 93 until 7th April 1994. The accompanying 'jazzy' credit sequence. Thanks to Conrad Higham for this. 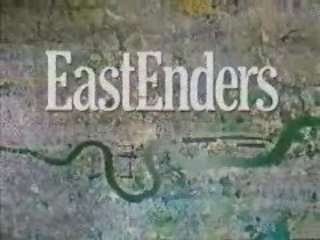 Eastenders from 1997. This set was introduced after the demise of the Jazzy version in 1994. 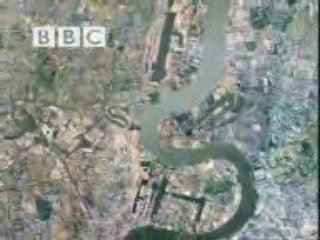 The first attempt by the BBC to add their logo onto Eastenders, as part of a policy after the 1997 rebrand to have the corporate logo stamp on things. Its exactly the same as the titles in use previously, only... um... a hastily slapped on BBC logo appears in the corner for a few seconds. 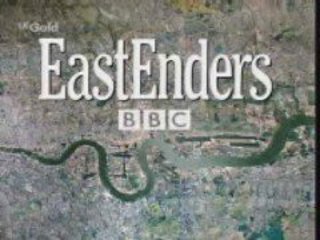 A slightly tidier set of titles introduced later in 1998, with the BBC logo properly positioned on the screen. 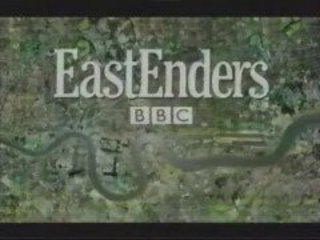 This set of titles came about after the move to widescreen. The main noticeable difference was probably the addition of the new Millennium Dome (later to become the O2 Arena) to the shot. 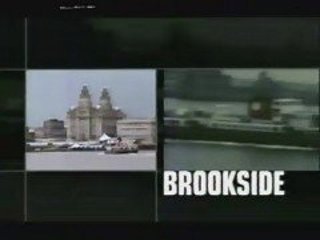 Based around Brookside Close, a set of houses in Liverpool, Brookside was Channel 4's flagship soap from launch right through to the noughties. Over it's lifetime, it became famous for pushing more controversial or challenging storylines inkeeping with the channel's overall ethos. With declining figures after 2000, it was slowly phased out before being axed completely in 2003. 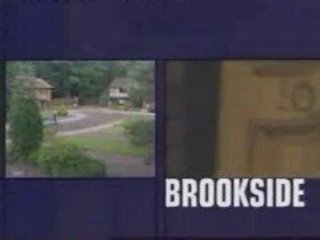 From 2002... and the titles now have a new background colour! 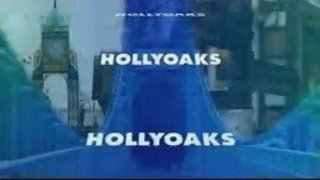 Whilst Brookside declined in popularity, Channel 4's later introduced teen soap from the 90s Hollyoaks flourished. With the eventual demise of the Liverpudlian soap, it become the new main soap for Channel 4, airing 5 nights a week once the close finished alongside frequent extra editions for spinoff channels such as E4. Made by the same company behind Brookside, Mersey Television (Later Lime Pictures), the soap follows the happenings of people in a fictional area of Chester. 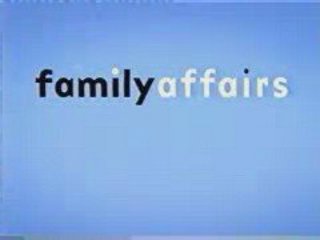 Family Affairs was the soap Channel 5 originally launched with in 1997, and lasted through until 2005. Since then the channel have focused their budget on importing soaps from Australia rather than any home-grown productions. Shown here are the 2002 titles to Family Affairs. 2003, and the latest and presumably last set of titles for Family Affairs. Nice to see Channel 5's 'we need to rebrand stuff every 2 minutes' philosophy has filtered through to their soap as well. 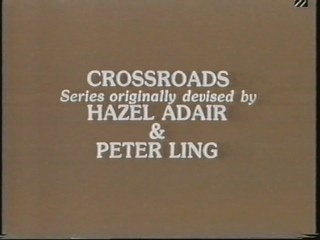 Crossroads was originally based around a motel, and became infamous for being low budget, with dodgy sets. Originally running from 1968 until 1988, and crossing the span between ATV and Central Television, it disappeared from our screens for over a decade, before being re-introduced by Carlton in 2001 for a short-lived revival as a new and more upmarket hotel. This is an end credit sequence from a 1984 edition. 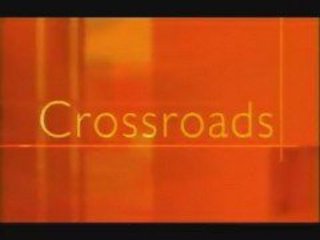 The titles from the first return of Crossroads in 2001. This time it was reborn as a hotel (Dont ask how that fits into the storyline). The show was brought back to fill in the tea, and lunchtime slots, left by the loss of Home and Away, however still had the infamous low budget! Despite its much hyped return, it flopped, and just managed to avoid being axed in 2002, replaced by Crossroads MKIII. 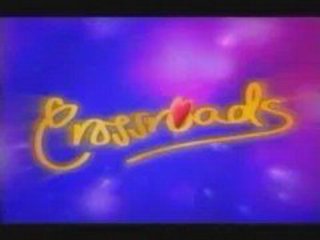 Come 2003, and another complete revamp was brought in, this time attempting to give the series more of a 'Dallas' feel. A couple of months later, this too was axed, with the producers deciding to write into the final episode that the whole thing with the Crossroads hotel had just been the dream of a supermarket worker... Emmerdale is ITV's other main soap. Originally produced by Yorkshire Television, it started off as Emmerdale Farm in 1972, and concentrated primarily on the life of characters on a farm with a small village around. However following the pattern of most soaps, this expanded over time to include more focus on the village. Originally filmed in various locations around Yorkshire, external production moved to a purpose built village set in the late 90s. Most interior filming meanwhile is now done in repurposed studios at the Yorkshire Television (now ITV Yorkshire) site on Kirkstall Road, Leeds. This set of Emmerdale titles, introduced in the mid-nineties, was the first set to drop the name 'Farm' part from them. 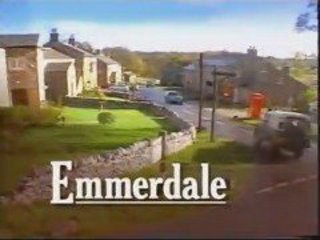 This set of titles lasted until 2005, being 'updated' partway through their run to accomodate Widescreen. 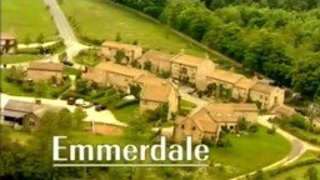 2005 saw a brand new set of titles introduced to Emmerdale, filmed properly for Widescreen and sporting a new font. 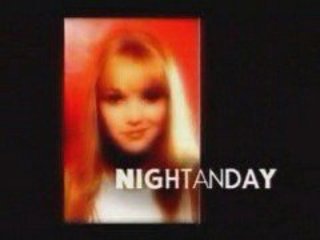 In 2001, a shortlived second new soap was introduced to try and fill the gap in the daytime soap slot left with the loss of Home and Away. Brought about when Crossroads was dropped to 4 episodes a week, as well as the daytime showings, a lot of effort was made to try and promote a steamier extended late edition. Ultimately the soap failed to make much of an impact though and was axed in short time. 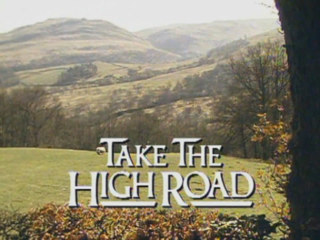 Take The High Road (later renamed just 'High Road') was a long running soap produced by Scottish Television from 1980 until 2003. Originally shown across the ITV network, it was dropped from most of the regions South of the Border in the 90s with only the Scottish stations, UTV and Border Television continuing to show it until the end. The premise focussed on the fictional village of Glendarroch in the highlands and the happenings of the people living there.