Film4 started off life as the British film production arm of Channel 4, eventually leading to the launch of a channel in 1998 as FilmFour, and marking Channel 4's first foray into the multi-channel world. Initially starting as a subscription channel, it was slightly rebranded as Film4 in July 2006 when it moved to free-to-air status instead. The current presentation package for the channel was introduced in 2014. 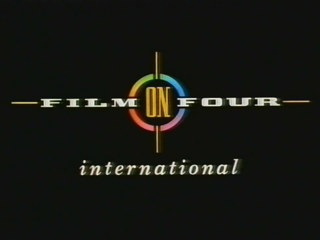 Prior to its launch as a full channel, the Film on Four brand appeared on films on the main channel usually part-financed by Channel 4 themselves. From 1990, the international variant of the opening ident attached to the start of movies falling under this strand. 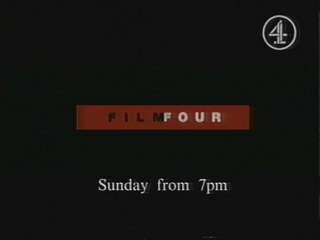 For the launch of the original subscription based FilmFour (as it was stylised then) channel on November 1st 1998, Channel 4 chose to simulcast the first night free on their main channel too. A promo from the day before launch highlighting that special event. 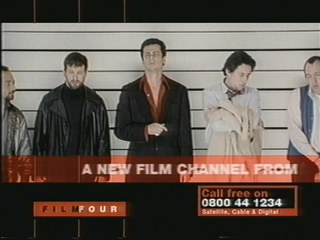 Another launch promo for FilmFour, this time promoting how to get the channel itself across the available subscription platforms of the time, rather than mentioning the Channel 4 simulcast. Film4's use of the 'Film Fear' branding around Halloween has a long history dating back to the earliest days of the channel. Here it is being used during another cross-promotional weekend between Channel 4 and FilmFour (as named then) before the premiere of the movie Scream just before Halloween 2000. FilmFour branded events on the main channel would pop up semi-regularly in the early days of the channel, as Channel 4 needed to drive subscriptions to their movie channel. Also shown here is the Stella Artois sponsorship sting at the time. 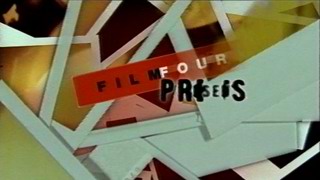 In another way to reinforce the FilmFour brand of the time on Channel 4, a 'FilmFour Presents' sting existed. Used before prominent showings, it would lead in to background conversation with directors and actors from the movie in question. 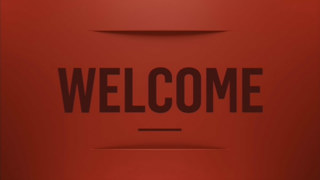 To start each day on Film4, and delineate between the channel's proper airtime and the filler Teleshopping that is used in the channel space overnight, a short welcome sting is aired. Before each film on Film4, a short rundown menu showing other things in the day's schedule is aired. Looking like a parallax website design circa 2014, the screen slides vertically between still images from the various upcoming films and the signature red screens of Film4's graphics package. 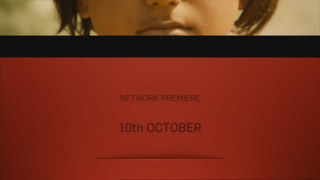 An example of the promo style for Film4, complete with red endboard. 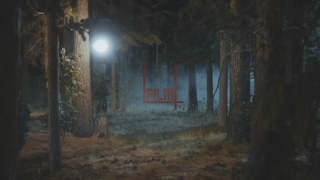 Idents on Film4 from the 2014 package consist of scenes broken up by a screenroll as the Film4 logo forms, designed to look like a strip of film running. Most of the sequences then have different variations on how they end to increase the total number available in the package. This one features a forest scene, set at night and ending with a mysterious light floating around. 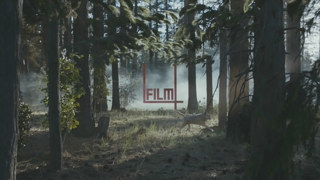 A second variant of the forest ident. This time it's a bit lighter as wolves run past across the screen. 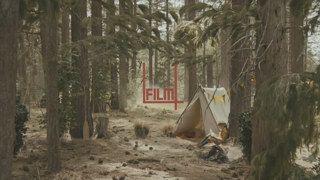 A third forest ident. It's daytime in this variant with some camping going on. Some of the same red balloons from the staircase ident also make a sneaky cameo. 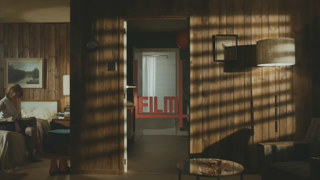 A hunting lodge/motel (depending on point of view) in this set of idents. In this first variant, a woman is sat on the edge of the bed getting dressed. 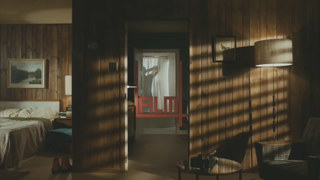 In this variant of the lodge ident, what can only be assumed to be the same woman can now be seen behind a shower curtain in the bathroom. A third variant of the lodge/motel ident, this time with guns pictured and a man sitting in the chair on the right. 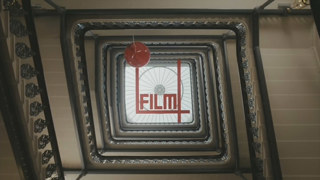 A view up a large staircase for this ident, and in this variant a balloon floats up the middle. 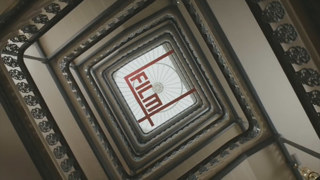 Another staircase ident, this time with a chase going on up the stairs as the whole scene slowly rotates - logo included. 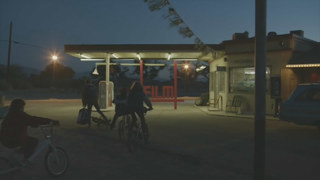 A gas station features in this Film4 ident, and in this particular variant a group of children on bikes pop by. Probably planning to use one of those free tyre airpumps if they're anything like me! 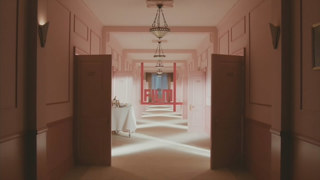 A corridor in a hotel acts as the setting for this Film4 ident. And in this particular variant, some supernatural happenings can be witnessed with lights flashing on and off and room doors flying open. 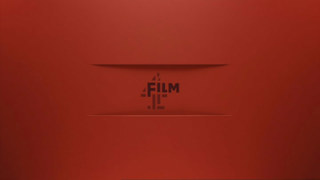 The updated trailer style for Film4 for September 2018, featuring their new logo which incorporates the Channel 4 blocks but otherwise unchanged from before. 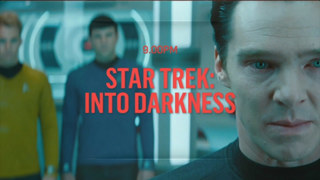 Following a refresh across all the Channel 4 channels, Film4 received a new logo on September 27th 2018 which now incorporates the signature 4 blocks. This was adapted onto all of their existing presentation, which otherwise remained unchanged. The opening from the first morning under the refreshed look here. 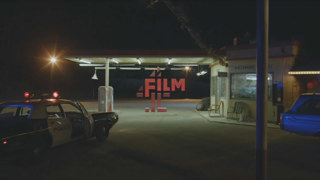 The first ident to air on Film4 on September 27th with the newly refreshed logo was one of the Gas Station variants, with a police car turning up. 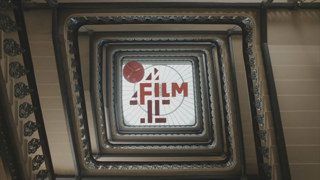 The second of the slightly refreshed idents to air on launch day for the new logo was the balloon variant of their staircase ident. 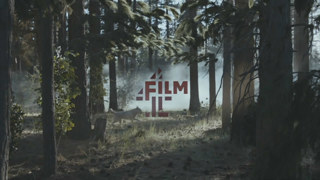 From logo-refresh launch day in September 2018, the wolves variant of the Forest ident sees the new Film4 logo treatment. 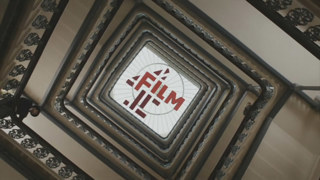 The chase variant of the Staircase ident still rotates as before just with the new Film4 blocks logo in the centre instead after the September refresh. Another variation of the Gas Station ident. This time with a burning tire (hey it's American) rolling in. Shown here from after the 2018 logo refresh. 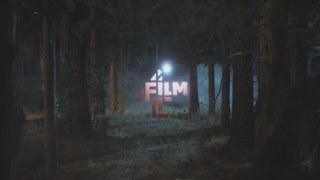 The light/UFO variant of the Forest ident for Film4, now complete with the refreshed blocks logo. Efforts have even been made to match the correct lighting for the new logo. 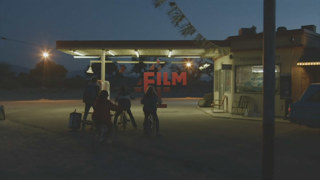 The refreshed version of the Gas Station with Children on Bikes ident for Film4, from September 2018. 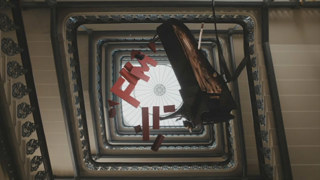 In this variant of the staircase ident for Film4, a piano is dropped from above, crashing into the channel logo. After the September 2018 refresh this was kept, updated to interact with the new blocks logo in the same way. For Halloween, Film4 saw a small adaption to their still only recently refreshed set of idents. To mark their 'Film Fear' season, the scene splits open with a fiery to reveal the words. Best not to ask what happens to the child on his bike or the gas station in such a situation... 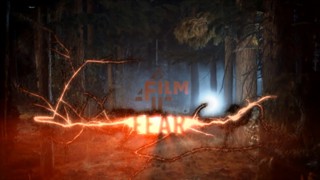 This time the UFO/Forest ident is edited to bring in the 'Film Fear' branding, for Halloween 2018.