BBC Choice was launched in September 1998. Targeted mainly at a younger audience (20-30's) with its 'entertainment' image, it showed a mixture of repeats from One and Two, as well as airing some series exclusively before they come to analogue. Almost a year after BBC Knowledge became BBC Four, BBC Choice became BBC Three in February 2003. As well as a name change, the new channel was designed to show more original programming than its predecessor, though due to the somewhat restrictive terms of its licence, it often ended up having to repeat the same originally commissioned programmes ad nausea.

The channel continued to grow over the following decade, even launching an HD version and carrying more well known programmes such as Eurovision Semi Finals and Olympics Coverage in 2012. However in 2015, as part of the overall attempts to reduce costs at the BBC, the channel was earmarked for closure. Officially it became the first BBC channel to 'move online' in February 2016, instead now becoming a brand used only on the website as opposed to a broadcast channel. 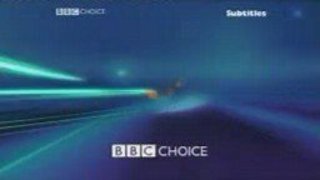 The last set of BBC Choice idents were introduced in early 2002. There were only 3 variants, all using the 3 cubes. (spot any patterns with the number 3!) This was probably only supposed to be stop-gap measure until BBC Three launched... only that was delayed more than they expected. In this version, the cubes zoom off into the distance. 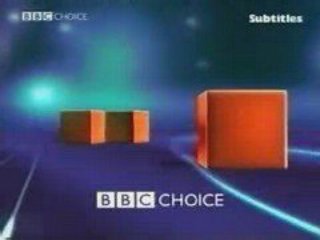 The three cubes roll around in this variant. 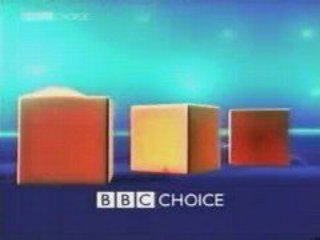 In this third variant the cubes seem to have become rebellious. They start off fighting with each other, then all seem to become paralysed, unable to move from one spot! 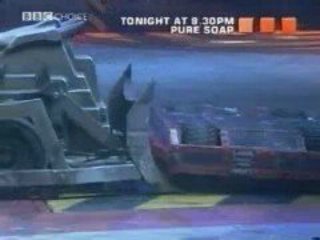 Infamous at the time for being annoying towards viewers, although I suppose its nothing compared to what they do with the CBBC channel! Towards the end of most programmes, three cubes used to appear across the top of the screen with an advert for a programme. Usually this told people what was on next, although as is seen in this example, it could be for anything! 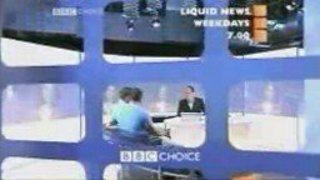 An advert for Liquid News on Choice, one of the programmes exclusively made for the channel. As with the idents, the old non-coloured-box BBC style was still being used while the rest had their boxes. I suppose the orange cubes are thrown in again, and they're boxes! 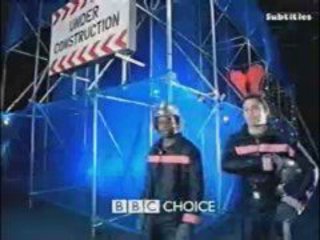 For Christmas 2002, the 2 digital channels were given idents as well. The Christmas Choice ident follows on the 'building site' theme in the run up to the launch of BBC Three. 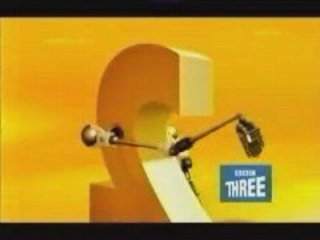 Like the launch of BBC Four, the launch of BBC Three was simulcast on BBC Two (Are you following so far). To handover to the new station, this slightly tweaked version of one of the regular BBC Two idents was used, bearing more than an uncanny resemblance to the handover ident used when BBC Four launched. 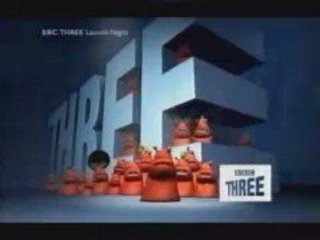 Some orange blobs and Johnny Vaughan Welcome viewers to BBC Three. As Vaughan tells us what we're about to see is 'an exact replica of a typical night on BBC Three', little did we know at the time just how literally that was meant... 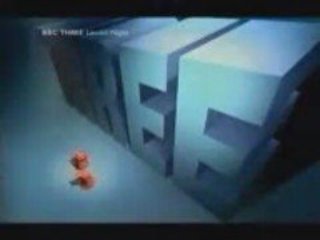 After welcoming viewers, Vaughan then leads us into a 3 minute taster of what is to come on the channel. 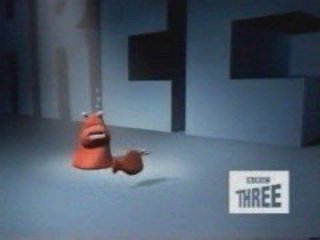 One of the new idents based upon the blobs theme. In this version, the character is talking underwater! This time, one blob tries to frighten the other two with stories about the power of his Glasses! 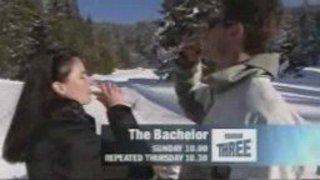 An example of the promo style on BBC Three. Notice how little it has in common with the trailer style of the other BBC stations of the time. An early example of the break from the corporate style. 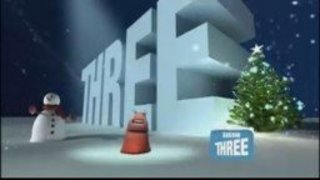 A christmas 2005 promo for the Little Britain and a Packet of Crisps channel... bug style! 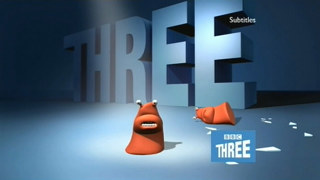 One of the orange worms is talking away, when suddenly someone else comes crashing in creating somewhat of a distraction. 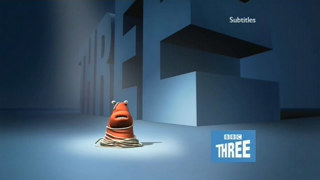 A story about how difficult it is to make spaghetti in this BBC Three ident. 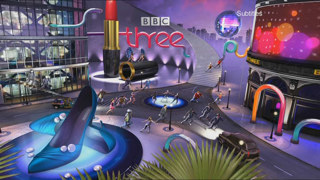 BBC Three saw its first major rebrand in 2008. Out were the orange blobs and the boxed channel logo, and in were pink pipes, and small computer rendered people in surreal worlds. In this ident, a series of people dance on the street. 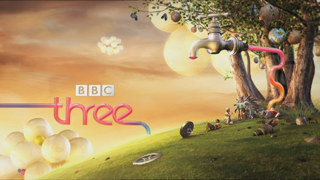 The little people try and remove the giant plug from the hill in this short sting. Hey, don't blame me - like Catchphrase, I just say what I see! 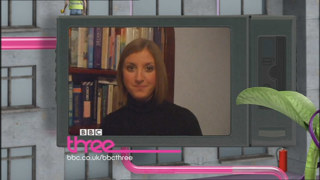 Initially with the rebrand, a big fuss was made of the plan to have user submitted content for continuity. One such user submitted link into The Real Hustle is presented here filmed on a shaky webcam. As is often the case with these user interaction plans, the idea was quietly dropped quite quickly. 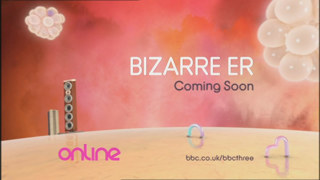 An example of the 2009 trailer style for BBC Three. 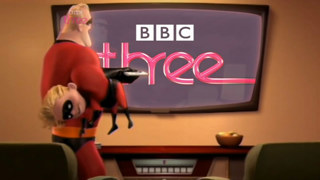 A short sting used to lead into an airing of Disney's The Incredibles on BBC Three in 2011, using pre-supplied animation from Disney. In the later years of its life, much of early January on BBC Three would be used to air repeats of movies the BBC had acquired for BBC One over Christmas, allowing them to maximise their investment in film rights even if the films themselves seemed a little out of place on the channel sometimes. 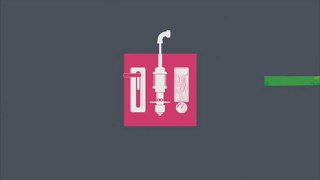 In a move designed to give them a fresh brand in time for the main channel's closure and their move to 'online only' status, BBC Three introduced a new look to their whole pres package in the month before the planned move. The logo is now designed to sit well within a square for easy use in app icons, and in the idents features various graphical animations forming in and out of it. A periscope and surgical tools are just a few of the items in this one. 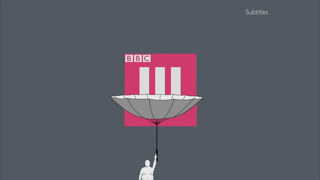 A tablet and headphones feature (just so you know how hip and intouch with the modern generation auntie is), before a trio of unclothed people bounce up and down on the screen. A programme promotion in the 2016 BBC Three style. 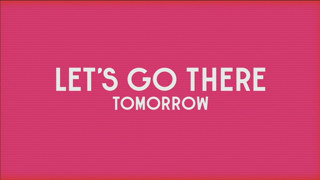 BBC Three isn't closing, really, honest, we promise!! One of many trailers put together and aired heavily towards the end of their broadcast channel time to try and really hammer home their move online. 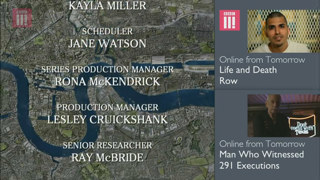 The ECP style was also updated to use the new BBC Three logo. 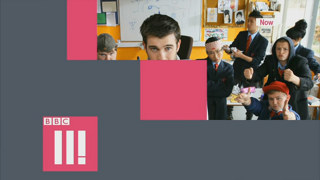 Although it wasn't intended to be used for long on the broadcast channel, a new coming up menu was put together as part of the new package. 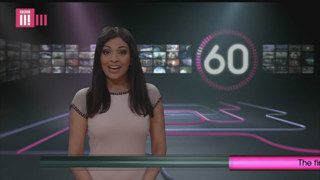 One of the shows to be dropped completely with the move online was the channel's long running 60 Seconds News. From the final evening of BBC Three in 2016 (offically - ignoring the quietly hidden slots that lasted a little longer in the middle of the night for another month) - The last ever edition of 60 Seconds News goes out just after midnight, with both some of the invision news and the ticker along the bottom covering the fact it was their last ever show, alongside the actual news. Amazing how much you can fit into a minute! 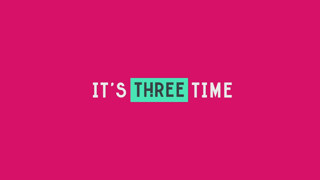 To soften the blow of a return to the shorter pre-2016 length of their 10 O'Clock News, the BBC decided to air BBC Three programming on BBC One in a late night slot Monday-Wednesday. To mark this, a new 'Threetime' ident was introduced for the strand, showing both BBC One and BBC Three branding together.