November 2001 saw the first major relaunch of the BBC2 Identity for over 10 years. Out were the multiple themed idents, in favour of computer animations of a 2 against a slightly garish but more consistently applied yellow background. Added to that was now a purple box, and a set of signature notes to identify the channel. Despite the changes, some things did remain, namely the same stylised 2 as the previous look, just with a variety of new twists applied to it including an attempt to make it into more of a robotic character... sometimes! 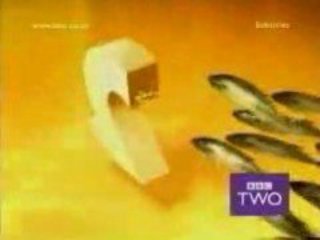 Monday morning on the 19th November, and the first sighting of the new ident. There was no special announcement though on this first showing, possibly due to it being used to lead into Children's programming when the BBC thought none of us grown-ups would be watching... 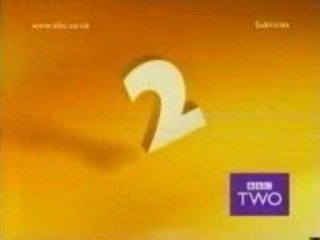 Another ident from the new batch in November 2001. This time with the 2 bouncing around the screen. 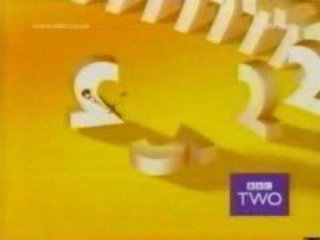 A third ident shown on the first day of the new look. This time featuring the two's all being knocked over in a domino effect - Well, sort of! 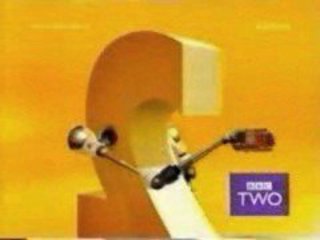 The fourth of the new idents(there were 4 in total in the original set). This time the BBC Two logo is missing, so the character has to turn around a card with it on. This is the shorter version, as all the new idents have a long and short version. This ident was later put to good use with the launches of both BBC Four and BBC Three, which were both simulcast on BBC Two. 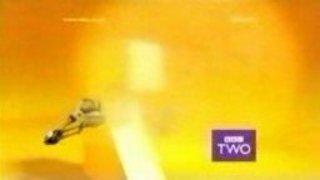 A fifth new ident introduced later, in early 2002. This time the 2 has to clear a mark off the screen... 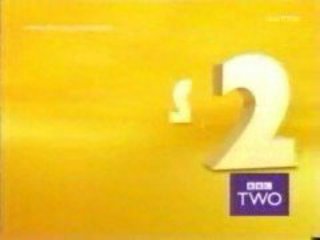 Another new 2002 ident. This time the BBC2 character moves in and out of some invisible walls... as you do!

A third new 2002 ident. Here the character tries to avoid being hit by drips of water! 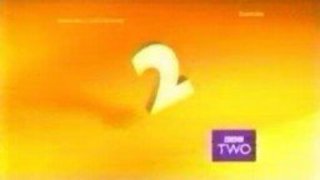 Shortly after the launch of the original set in November 2001, it was decided that they didn't have an ident suitable for sombre and serious programming. Rather than come up with a new ident, the existing version of Bounce was edited to include an alternative 'serious' soundtrack.

Another 2nd version of an original ident. The designers obviously decided that the original Fish version didnt look right, as the 2 character was backwards for most of the ident (see first new look pic). Hence, a few months later, they flipped it round, and it would appear the original was withdrawn. 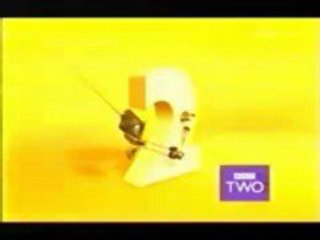 One of 2 brand new idents introduced in Summer 2002. In this one, the 2 character has acquired a useful remote control. 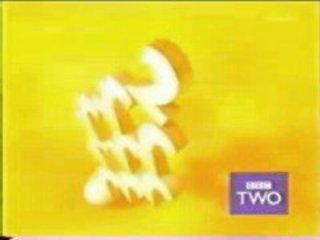 The other Summer 2002 ident. This time there's lots of 2 characters, doing circus acrobatics. 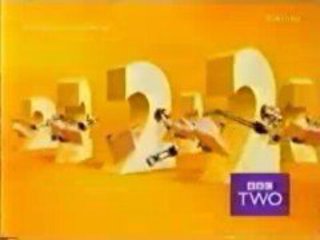 A special new ident introduced in 2003, to promote the BBC's 'The Big Read' event. 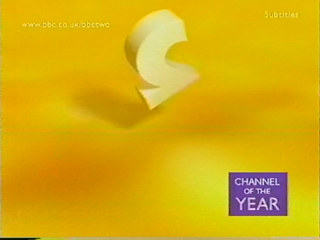 Complete with special Channel of the Year branding for 2003 here, in this ident the 2 bounces around in time to a Reggae Drum. First introduced as part of a special season on the channel, this was subsequently kept in regular rotation. Concerns over the 2 appearing backwards that had led to the re-editing of 'Fish' had clearly been dropped again by this point. 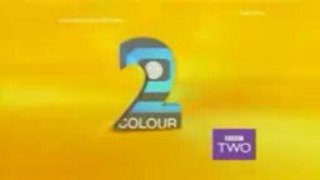 A special ident brought out for the 40th Birthday of BBC2. Basically it features the 'Invisible Walls' ident, but with a montage of past BBC2 idents projected onto the 2s as they float past. 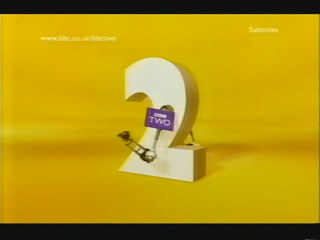 In this yellow ident, the 2 character attempts to stick the purple BBC Two box on the screen... only for it to become attached to him instead. 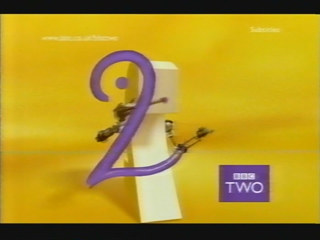 First introduced in late 2002 and shown here in 2004, the considerably less famous 'Paint' ident for BBC Two. Here the 2 character paints a numeral on the screen using a pot of purple paint, before turning it into a face. 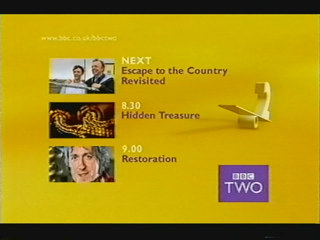 A short run-down menu of evening shows on BBC Two, using clips from the 'Circus' ident to break between different programmes. 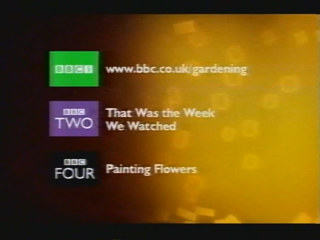 A slightly different menu from 2004 on BBC Two, this time cross-promoting things on multiple channels, without using an ECP. 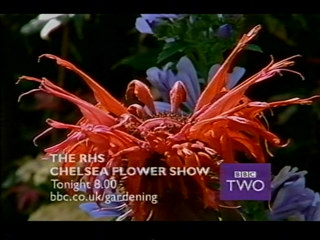 A 2004 promo for BBC Two... but with the BBC One box making a brief cameo appearance to cross promote a show on the other side.

A short promo coming out of the BBC Two Learning Zone programming in 2004 to direct people towards their website for further resources. At this point in time, the BBC were still experimenting with the fairly unmemorable 'BBCi' for all their interactive outlets, website included.