On the 28/10/2002, the day we had all been expecting finally came. The region names were abolished from the idents to be replaced solely by ITV1. The region names did still appear before regional programmes (unless you're in London), although it was a very poor excuse (ie a tiny little mention). By May 2003, this mention had also been dropped. Even SMG, UTV and Channel, who are independent of Granada/Carlton, hence still have a choice, had all decided to take the easy/cheap option and use the idents by January 2003. Still, despite the end of regionalism, a bit of a budget was initially spent on filming a wide selection of idents.

As there's so many of these, I've had to split them across 2 pages. A link to Page 2 can be found at the bottom of the page. 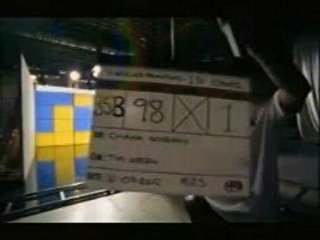 At 9.25 on the first day, a minute long promotion heralding the new brand went out, showing 'behind the scenes' filming of the idents, and finishing with a solemn black version to lead into Trisha. 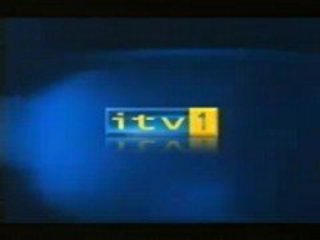 The first new ident. Aired at 10.30 before 'This Morning', it features Ant and Dec (the one which has been used most extensively in the pre-launch marketing by ITV). 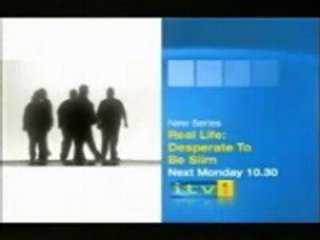 Another ITV1 advert, shown just before 1pm on the first day of the centralised ITV celebrity look, and giving us a look at the new endboard. 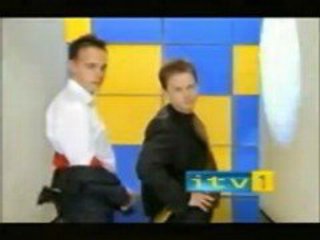 Apparently there were others shown, but I didn't see any new idents again until 1pm... oh look! It's Ant and Dec again! Isn't that imaginative! Into the gameshow 'Never Had It So Good' was an ident featuring Trevor McDonald. Um... nice to see the ident bearing some resemblance to the program! Another advert, broadcast just before 2.30pm on the first day of the ITV1 Celeb look, for the program 'Mr Right' - another show which didn't rate too well for ITV in the end. This one uses the full new graphics package to present time, day, channel etc. 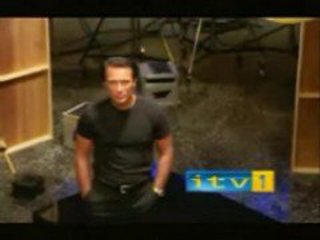 For the 3pm news, we had this ident. 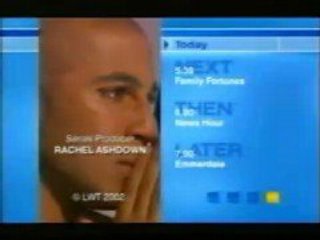 One of the better aspects of the relaunch can be seen here. Out with the idea of generic credits. Now, credits are designed so they can be shrunk to a column, allowing the announcer to advertise a programme menu on the right. Notice the slight cheating with regards to the regional news, simply saying 'News Hour' onscreen, with the announcer advertising 'The latest news from your region'. This is from the end of Popstars, at just before 5.30pm. 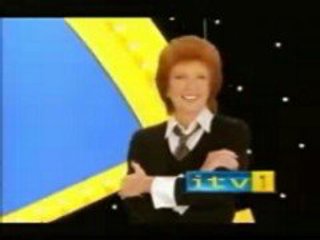 Leading into Family Fortunes at 5.30pm on the first day, we got to see Cilla Black. 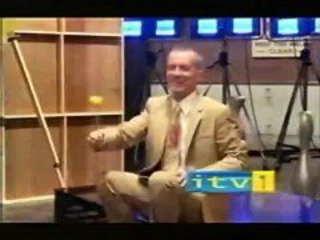 Not from the launch day, some other new 'celebrity' idents. Where I know who the people are, I have included their names. This one features Frank Skinner. 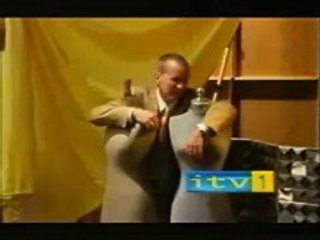 Another version with that same man. 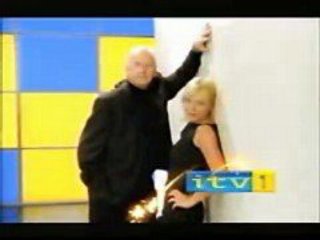 Geri Haliwell and Pete Whatshisname feature in this ident. This is the Christmas variant, hence their cheap stars-flying-around-the-logo edit. 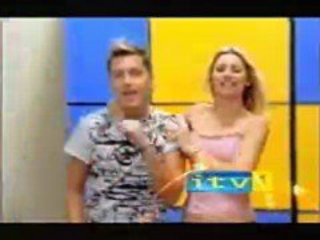 Tess Daly and Brian Dowling, from SMTV Live, making a complete fool of themselves for ITV1's idents. This is also a Christmas version. Thanks to James Hadfield for identifying these two - I didn't know who they were. 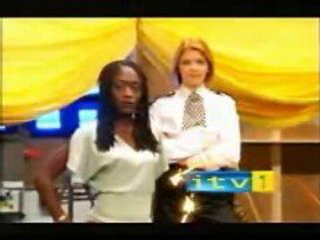 Diane Parish and Jane Danson from The Bill feature in the short version of this ident, with some token festive adornments. 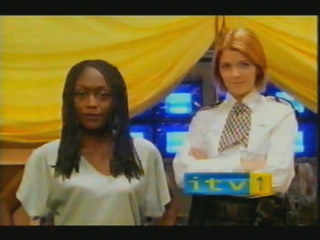 Diane Parish and Jane Danson star again in the long version of The Bill celebrity ident, this time without the festive branding. 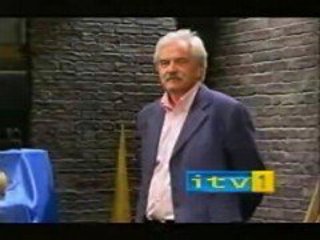 Des Lynam stands around doing nothing in this ITV1 ident. 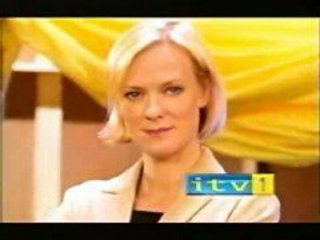 Another ITV1 ident with Hermione Norris, well known for her ITV work in Wire in the Blood and Cold Feet. Robbie Earle stars in this 2002 celeb ident for ITV1.

Mary Nightingale, the news reader, features in this ident. 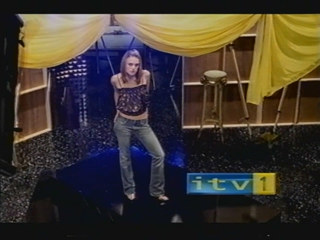 Keira Knightley stars in another celebrity ident from the initial 2002-2003 batch for ITV1. 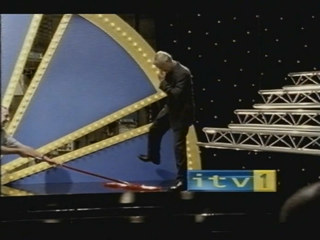 Chris Tarrant decides to be a pest to the hardworking man trying to sweep the floor in this short form-up ident. The lacklustre re-edit done to the idents for the first Christmas post-centralisation may have looked awful. However ITV had some nicely done graphics in use on the promos. This is a typical example with the reindeer.... looking at those damn shooting stars again! 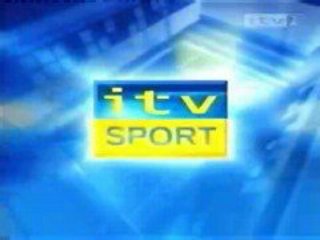 In keeping with the new look ITV1, this brilliant sports sting was introduced. Featuring a very different style to the ITV1 idents themselves. 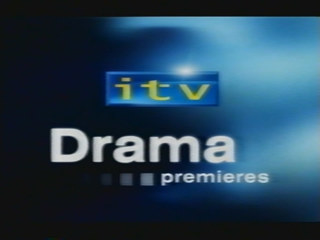 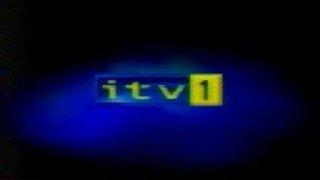 Whereas they used celebrities at first, ITV soon adopted a policy of using their nice flashy generic ident into all News programming. This is the long version. Clip courtesy of Ashley B. 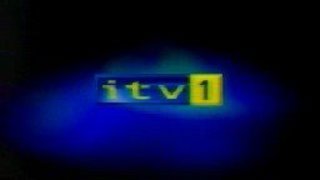 As with all of the celebrity idents, there's also a short version of the Generic ident. Thanks to Ashley again for the clip. 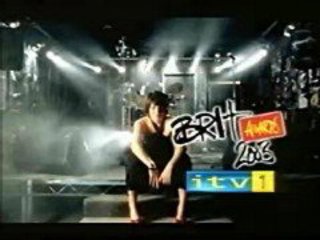 Hmm.... for Christmas 2002, where the idents were in use for several days, ITV went to the great expense of adding a few shooting stars around their logo. For a one night event (ie The Brit Awards), they produced several new special idents, some featuring musical acts, and another dull version featuring the hideously overused Davina McCall. Priorities anyone? Bah humbug! 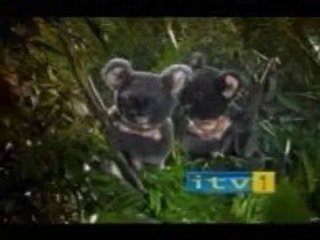 Another special ident, this time used to promote ITV's programme 'I'm a Celebrity, Get Me Out Of Here!' in 2003. The ident features the Koala puppets, which had been used extensively in the pre-launch programme marketing, and was used into the junction of nearly every programme on the first and last days of the show.